Tommy Thompson Park is an amazing spot for bird watching: 316 species of birds have been recorded at the park, including at least 55 breeding species.

Tommy Thompson Park is an important stopover during migration for many bird species that need to rest and refuel to continue their journey. In addition to many species of songbirds, the park also plays host to migrating raptors, waterfowl and shorebirds.

In 2000, Tommy Thompson Park was declared a Globally Significant Important Bird Area by BirdLife International. It earned this designation for:

The Tommy Thompson Park Bird Research Station (TTPBRS) is dedicated to the understanding and protection of birds and their habitats through monitoring, education and research.

Bird habitat enhancements at Tommy Thompson Park have targeted a number of species:

Above, left to right: habitat for bank swallows at Cell One Wetland; a small bird box for tree swallows; a tube for marsh-nesting waterfowl

One of the most successful projects was the introduction of Common Tern reef rafts. While these are still in use in Cell Two and Embayment D, we have created an island in Cell One to accommodate breeding terns. This proved an immediate success, as terns colonized the island within first year after completion.

Our efforts to support the breeding of Caspian terns have met with mixed results: record productivity in some years, disappointment in others. We will continue to enhance Caspian tern habitat and monitor breeding to help ensure the success of this species at the park.

A tern raft at Embayment D

The most recent endeavour to target birds is the Shorebird Habitat Creation project.

Shorebirds in this region face a number of threats, including habitat loss. Our new Shorebird Habitat Creation project in the Toplands area will provide critical foraging and loafing habitat for both resident and migrating shorebirds. Shallow ponds with open mudflats will have water depth managed to maximize the production and diversity of invertebrates. Water depth can also be altered to benefit other species, especially post-migration.

Future habitat enhancements may include nesting platforms for Black Terns; upland nesting opportunities for waterfowl, and encouragement of Trumpeter Swan nesting through control of the introduced Mute Swan.

A pair of mute swans

Tommy Thompson Park hosts significant numbers of birds that nest in large groups or colonies. There are eight different species of colonial birds that nest or have nested at the park.

(Hover over the images to view)

The Spit is home to one of the largest breeding Ring-billed Gull (Larus delawarensis) colonies in the world — at its peak, about 6% of the estimated global breeding population.

HERRING GULLS (Larus argentatus) are frequent nesters among the ring-billed gulls, but have not nested in large numbers.

DOUBLE-CRESTED CORMORANTS (Phalocrocorax auritus) began nesting at Tommy Thompson Park in 1990 and have since become a common sight throughout Toronto Harbour. The Tommy Thompson Park cormorant colony is the largest in North America, numbering 13,275 nesting pairs in 2016.

There are an average of 8 GREAT EGRET (Ardea alba) nests mixed in with cormorants and night-herons.

Since 1976, COMMON TERNS (Sterna hirundo) have nested in significant numbers on artificial breeding platforms, or “reef rafts,” and are now also nesting on an island we created in Cell One (see above). At its peak, the common tern breeding population at the park represented 1.8% of the estimated North American population.

Toronto and Region Conservation Authority conducts annual counts of double-crested cormorants and black-crowned night herons to track changes in populations and nesting areas. Upon completion of nesting the forests are also monitored to measure any impacts the birds have upon the health of trees.

Ring-billed gull management is an ongoing effort. Since the 1970s, TRCA has used various techniques to manage the population. Without such efforts, it has been estimated that the gull population at Tommy Thompson Park would now total approximately 180,000 pairs.

We also monitor common tern and Caspian tern populations by counting nests and noting any obvious areas of stress.

TRCA works in cooperation with the Canadian Wildlife Service (CWS) to count ring-billed gulls and herring gulls every five years. TRCA also partners with the CWS on long-term contaminant monitoring, as well as other colonial waterbird studies.

In 2007, Toronto and Region Conservation embarked on a process to investigate the need for cormorant management at Tommy Thompson Park. TRCA established an advisory group of stakeholders and experts to review the status of the Tommy Thompson Park cormorant colony and provide recommendations on possible management approaches. TRCA also conducted direct public consultation.

The goal of management strategy is to achieve a balance between the continued existence of a healthy, thriving cormorant colony and the other ecological, educational, scientific and recreational values of Tommy Thompson Park. Management techniques include ground nest enhancements, deterrence and site restoration. It is a spatial management strategy that encourages ground-nesting while discouraging nesting in healthy trees. Management does not include lethal culling or egg oiling.

In 2012, a remote webcam was placed on the outskirts of the Peninsula B ground nest colony for the duration of the breeding season. The images provide a glimpse into how the colony works! 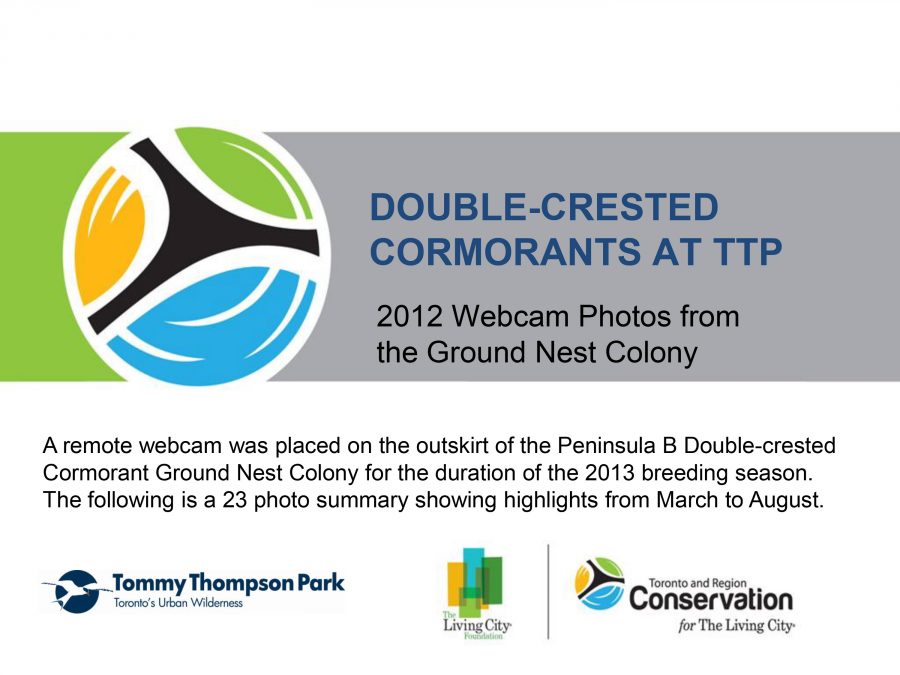 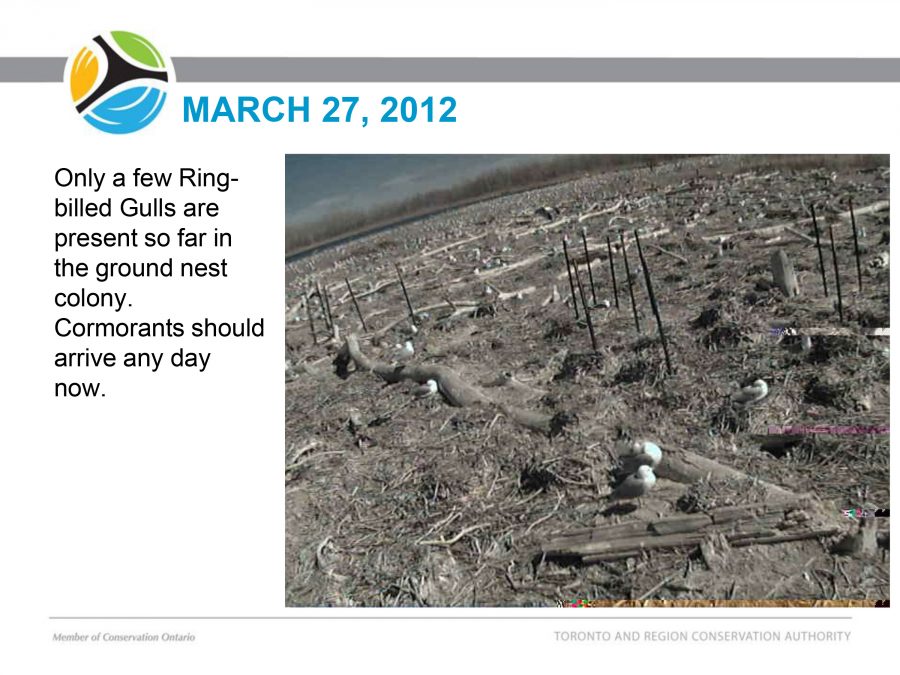 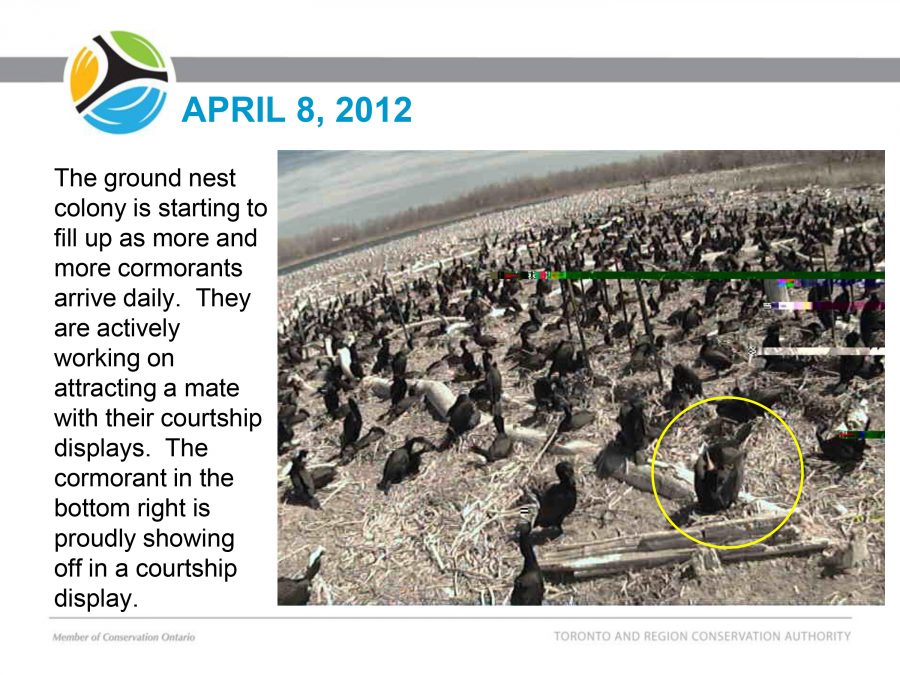 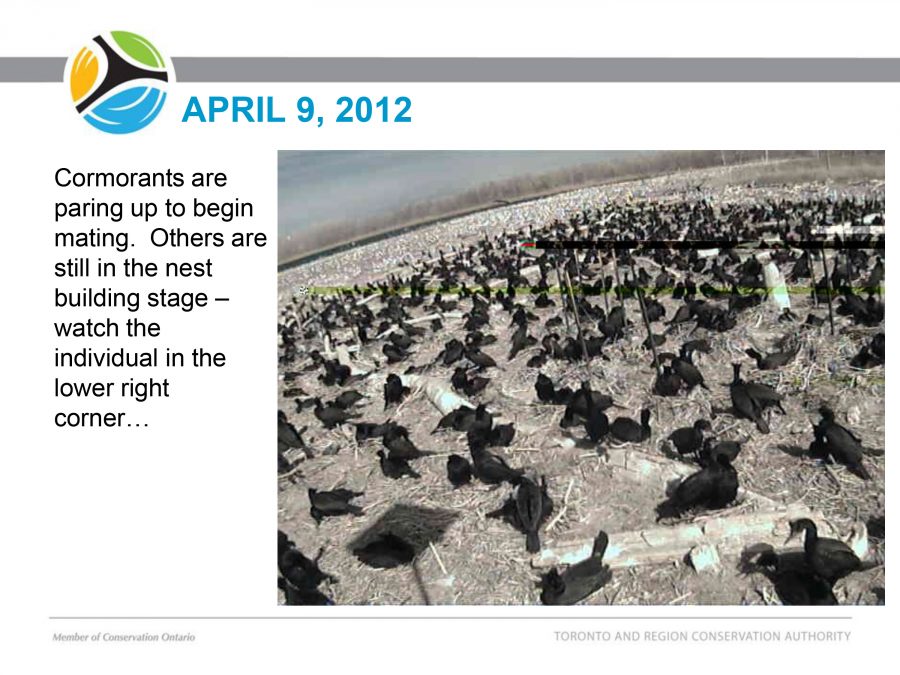 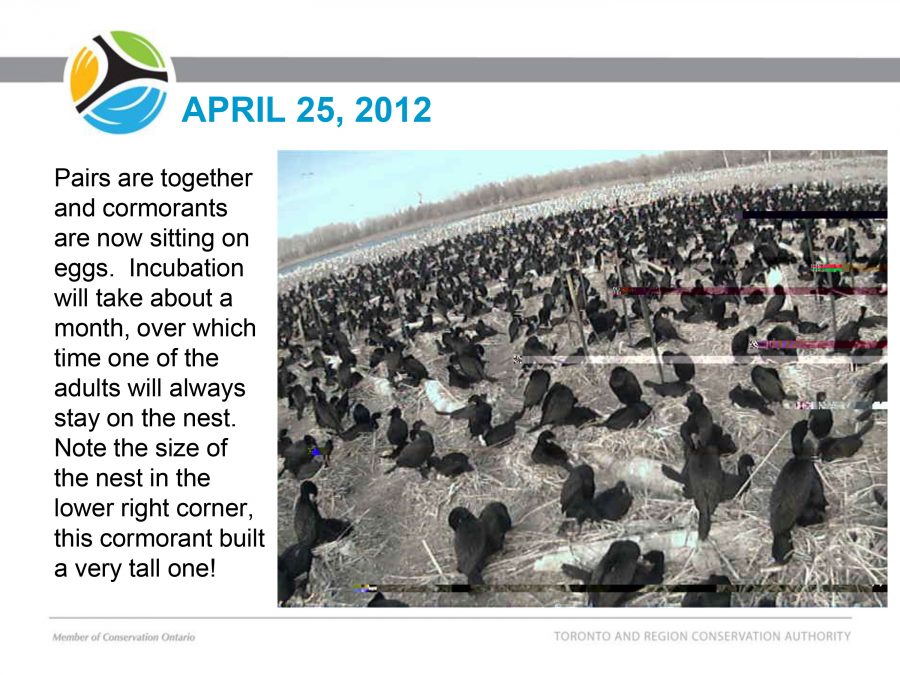 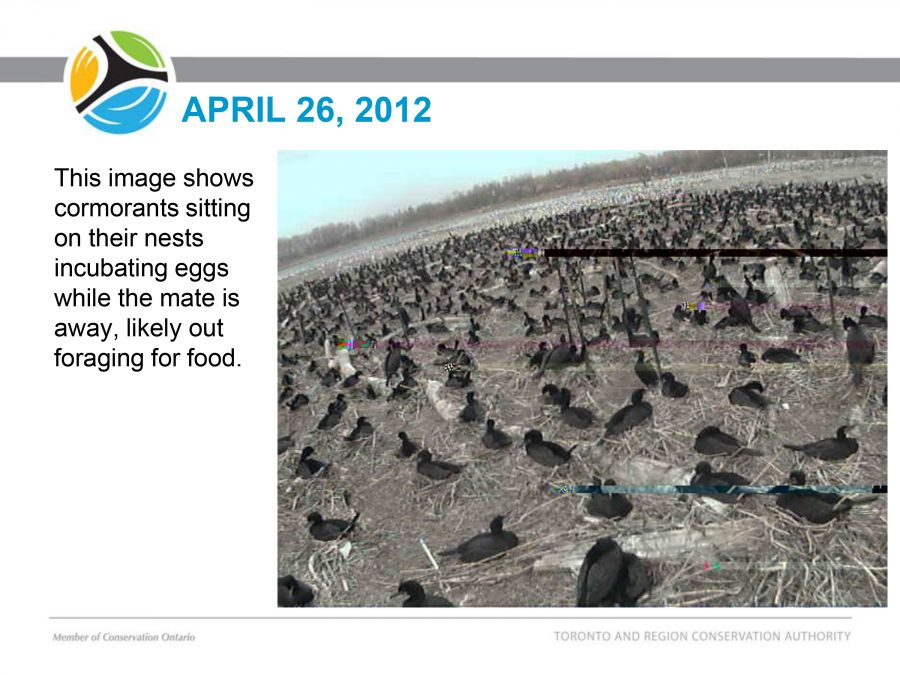 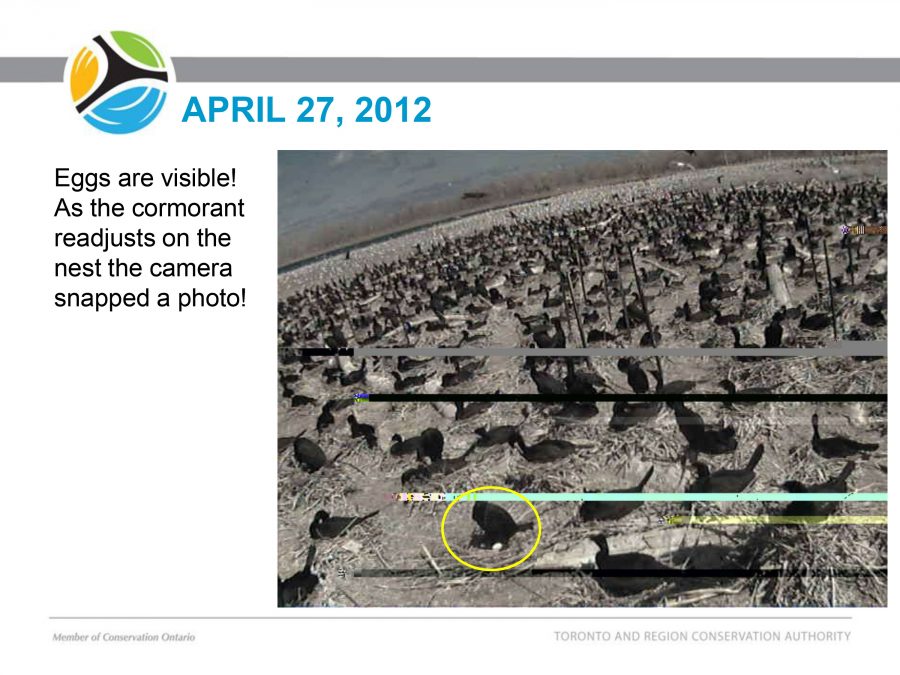 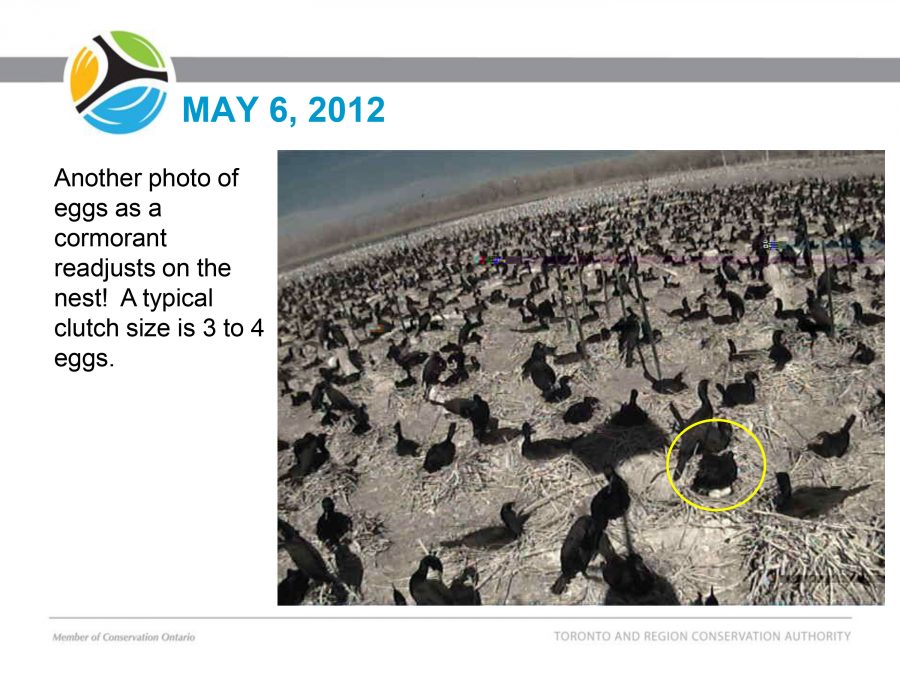 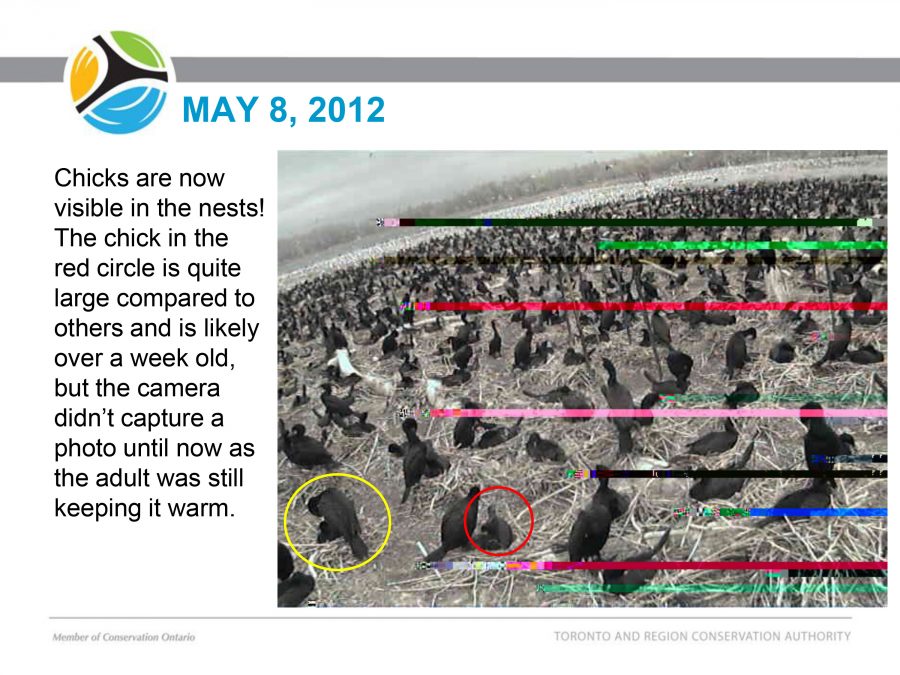 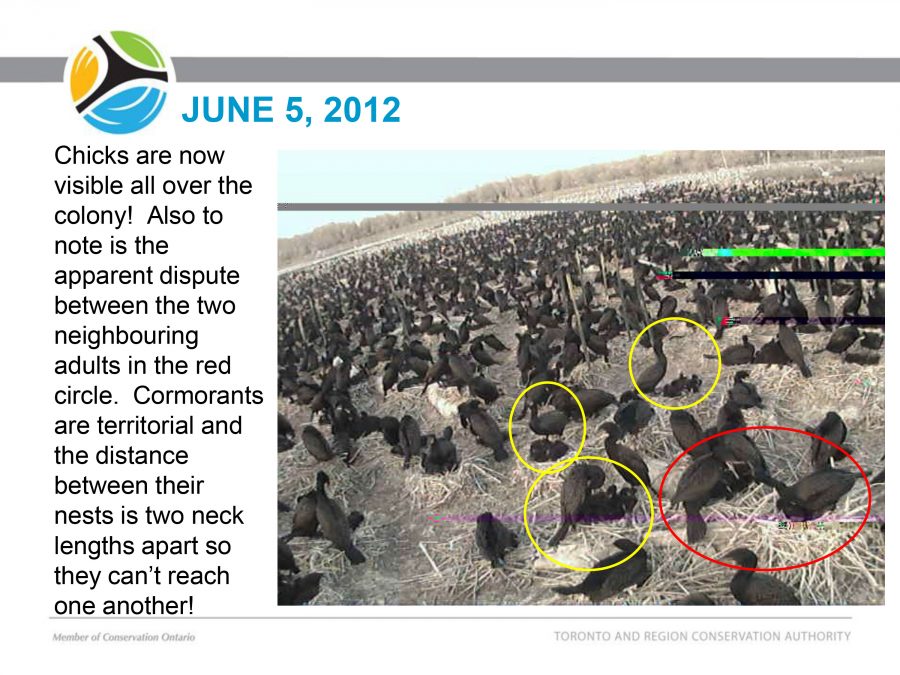 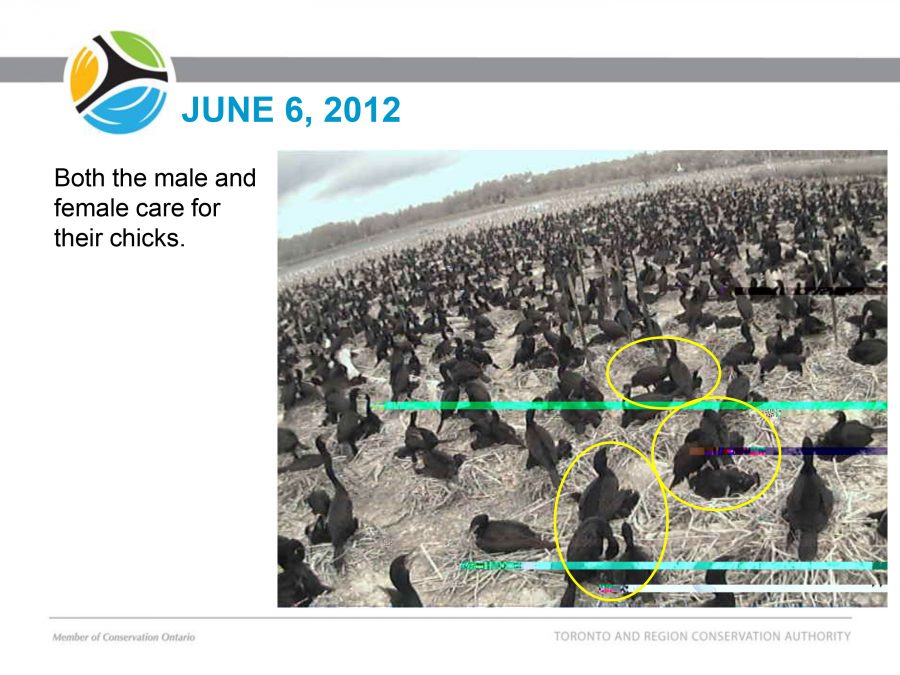 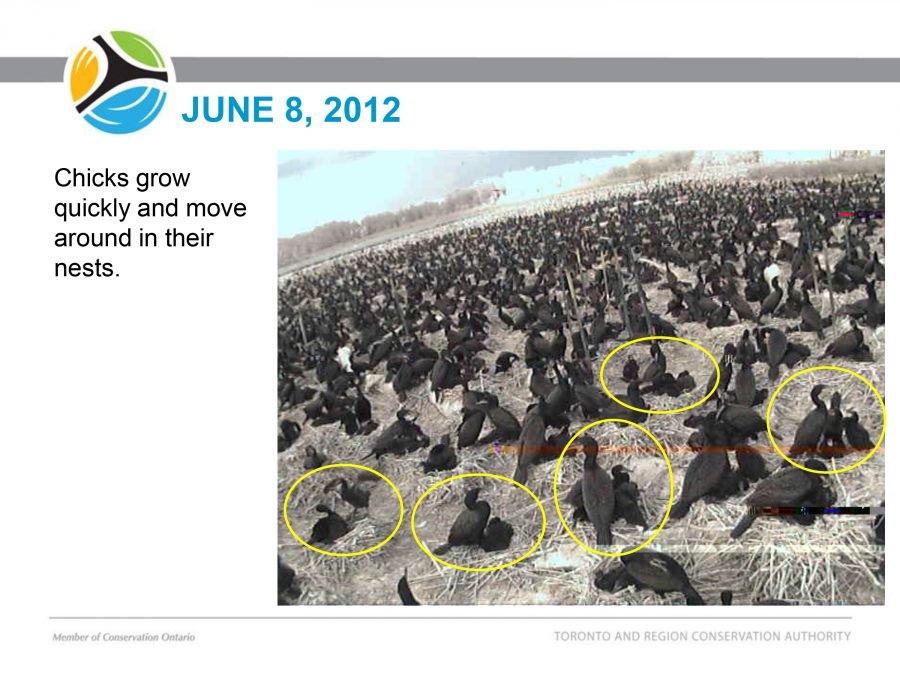 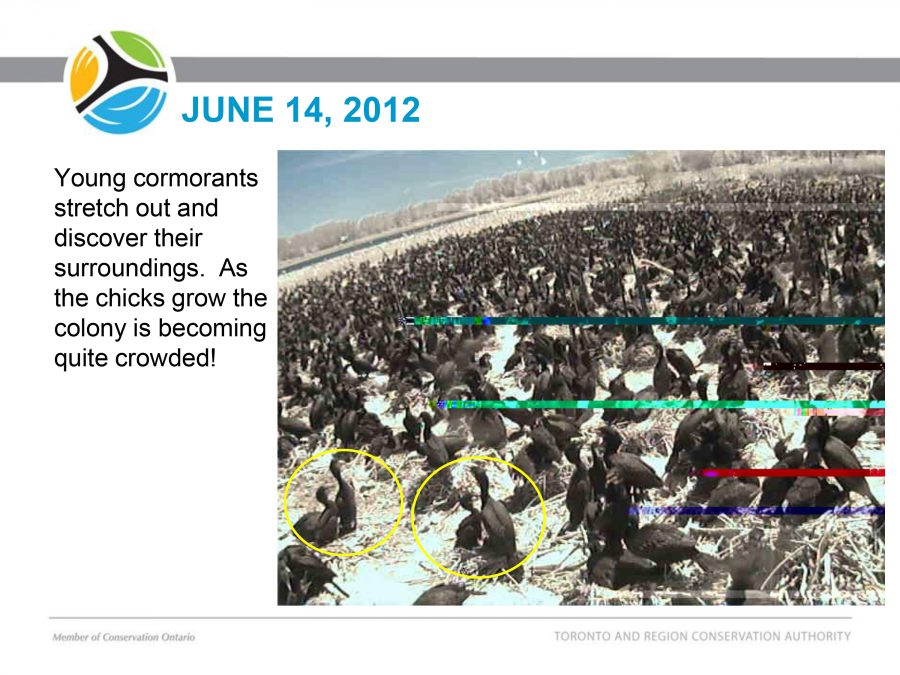 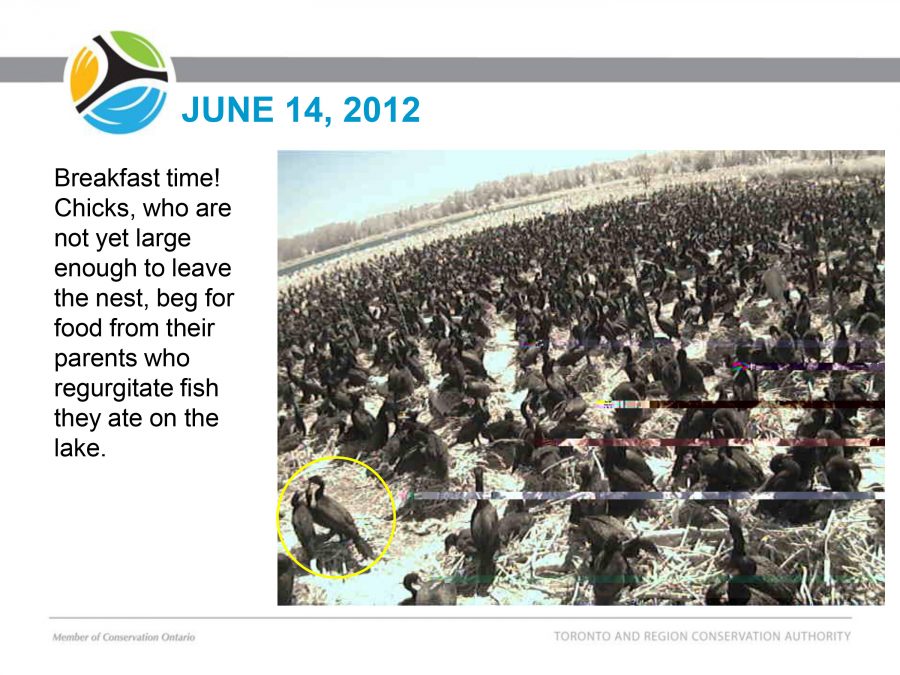 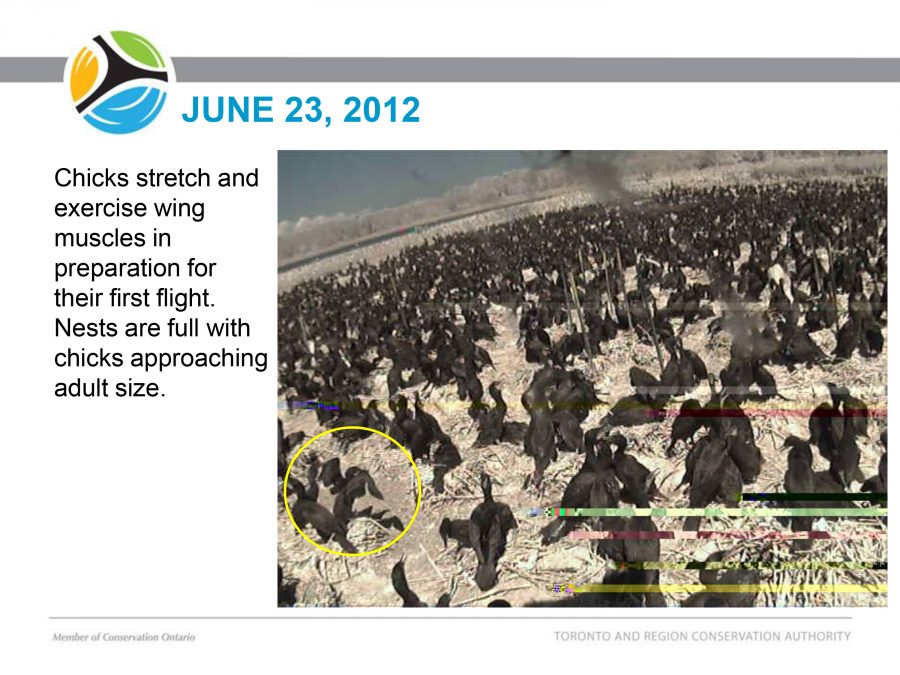 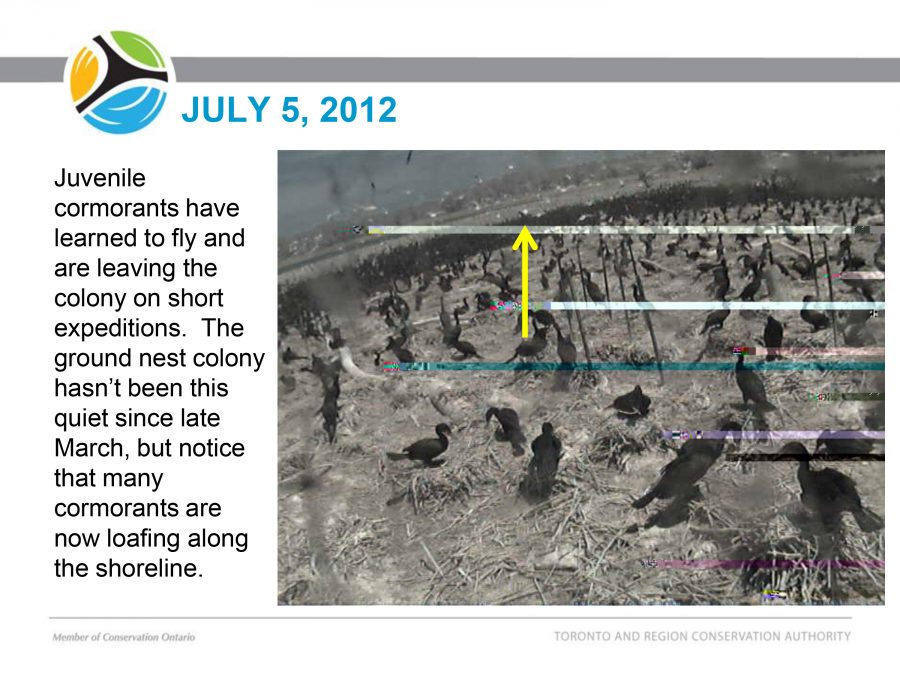 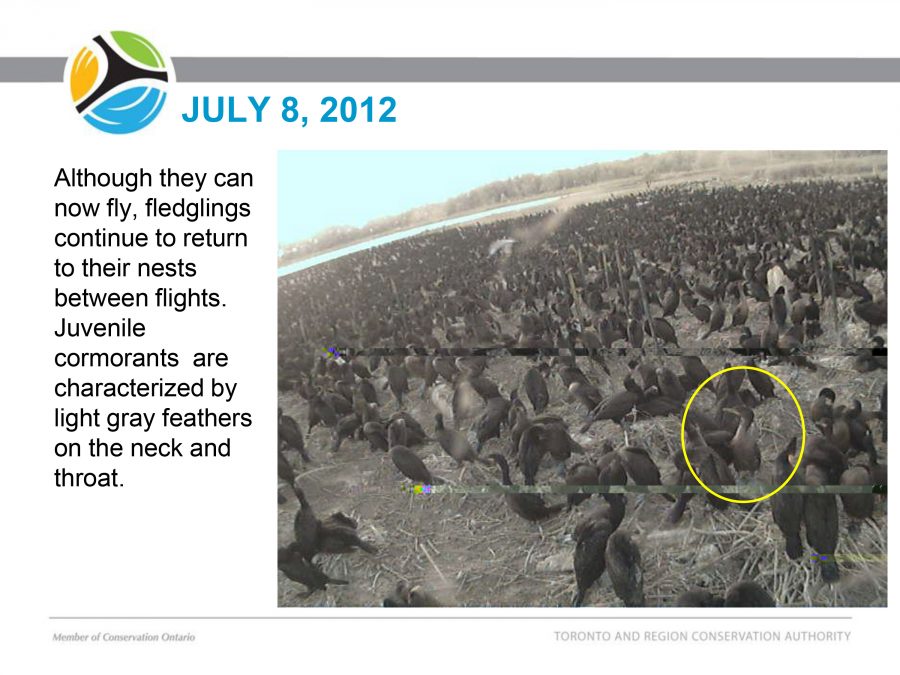 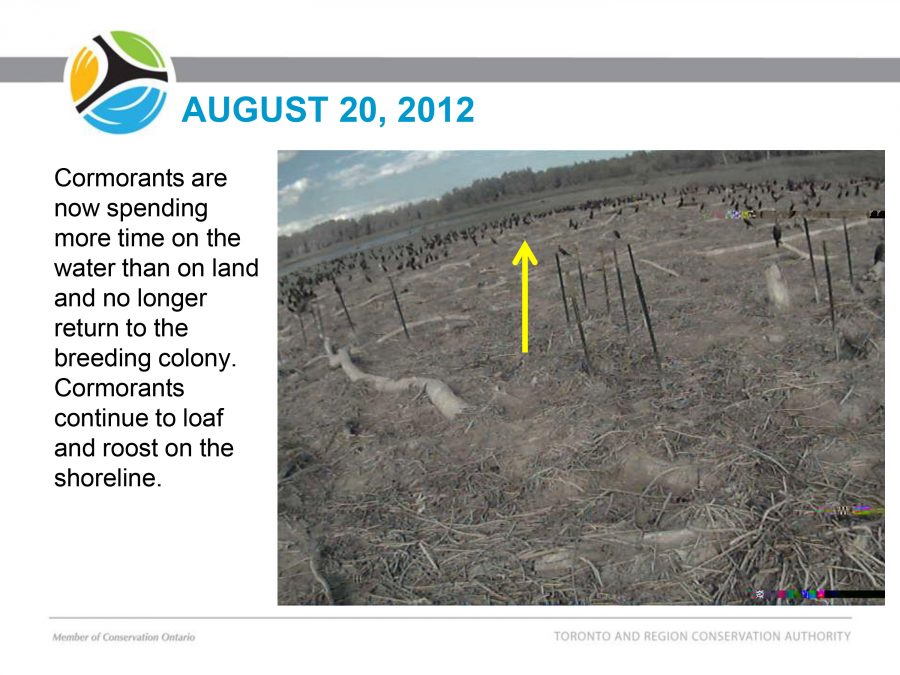 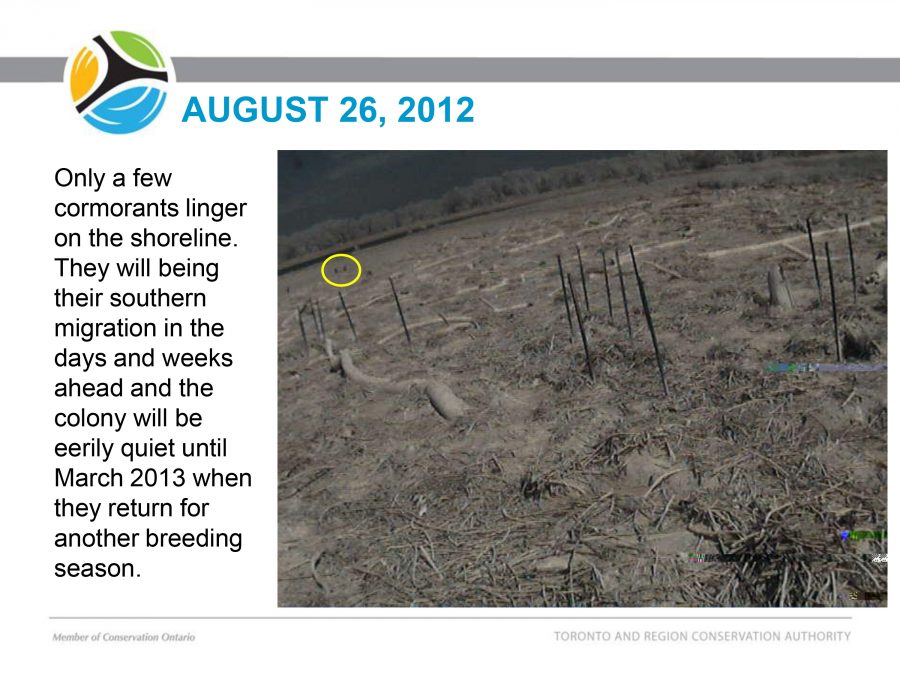 Aerial photograph of the cormorant colony at Tommy Thompson Park