Colonization of Tommy Thompson Park by mammals has been relatively slow compared to other wildlife such as birds. While birds can bypass the downtown core by flying over it, most mammals at Tommy Thompson Park have had to travel there on foot negotiating treacherous highways and areas of intense human settlement – but they have managed to get here! Likely they use natural river and ravine corridors, like the Don River valley, as well as man-made passages like railway and hydro corridors, to arrive at Tommy Thompson Park. Unlike birds or insects, most mammals are not easily seen and avoid human contact, so mammal sign is often the best way to determine their presence. Look for tracks, droppings and foraging evidence, like the browse of an eastern cottontail or tufts of fur from a predator-prey encounter.

Remember to NEVER approach or feed a wild animal – the best thing you can do for it is give it space and leave it alone!

The following is a list of some mammals or mammal sign that you may encounter at Tommy Thompson Park. 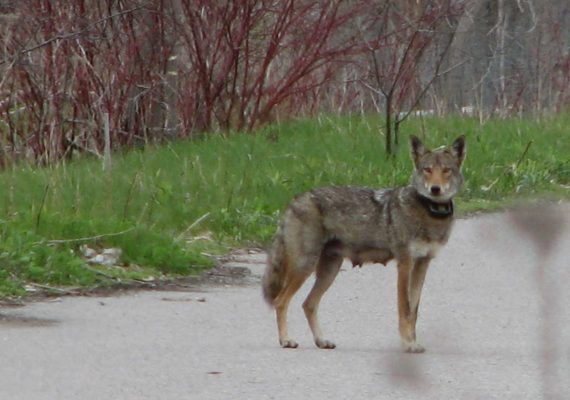 Coyotes have proven to be very adaptable in an urban environment, as witnessed by the gradual appearance of this species throughout much of Metropolitan Toronto. They were first documented at Tommy Thompson Park in 1993, when they were observed in the Baselands area and around the lighthouse. Coyotes prefer open or sparsely treed areas. They dine on an abundance of food items that likely include eggs from ground nesting birds, small mammals like rodents and eastern cottontails, insects and berries. You may hear the vocalizations of coyotes if you visit the park at night and look for tracks in soft mud or snow and for scat that marks their territory.

Coyotes inhabit many parks, ravines, valleys and use these greenspace areas, roads, railways, and hydro rights-of-way as travel corridors from primary habitat areas like Tommy Thompson Park. TRCA have established a partnership with the Ministry of Natural Resources to improve our understanding of these urban canids through a coyote telemetry research project at Tommy Thompson Park. This telemetry work facilitates the understanding of urban coyote population densities, organization among family groups or packs, behavior (including fearlessness towards people and attacks on pets as prey), territorial fidelity, food habits, dispersion of sub-adults and diseases. The research gives us valuable insight into the function and features of connective corridors between Tommy Thompson Park and the surrounding urban areas. Delineating these connective corridors provides valuable insight into the habitat requirements of these animals. If you see a coyote at Tommy Thompson Park with a collar, it is one of the study coyotes whose movements we having been tracking several years. Please report your coyote sighting to the park naturalist and remember – never approach a wild animal.

While the beaver is considered mainly aquatic the mink and muskrat are semi-aquatic. Beaver have been present at Tommy Thompson Park for over 20 years and evidence of their activity is obvious near almost every aquatic area. In some areas trees have been wrapped with wire to prevent the beaver from cutting too many. Mink have been observed irregularly since the mid-1990s; however in 2006 a mink was documented in the Cell One Wetland. This is an important indication that the Cell One Wetland creation project is successful through the design of functional, productive habitat for a range of species, including mink. Also look for evidence of mink around the Embayments and Cells Two and Three. Muskrats are fairly common at Tommy Thompson Park and have been observed in every aquatic area of the park. Most recently they have been spotted in the Cell One Wetland foraging on the aquatic plants that have been planted as part of the wetland creation project.

Tommy Thompson Park has an ample population of raccoons and they have been observed in almost every corner of the park, especially around the Embayments and the Cell One Wetland. It is easy to find raccoon tracks in soft mud, but since they are nocturnal, they are not often seen. To spot a raccoon in the daytime look for them sleeping in trees – one was even seen sleeping in a Black-crowned Night-Heron nest on Peninsula C. Eastern cottontails are regularly observed at Tommy Thompson Park, although their populations sometimes dip in response to predation by coyotes and raptors. Cottontails are often seen foraging in meadow areas and are usually never too far from escape cover such as shrub thickets or created habitat piles like those around the Cell One Wetland.In the spring and summer the woodchuck or groundhog becomes one of the most frequently observed mammals at Tommy Thompson Park. They prefer open habitat like meadows around Triangle Pond or open forests such as the poplar stand on the Baselands. Their habitat preference coincides with the coyote and is a significant contribution to the Tommy Thompson Park food web.

All of these small rodents have important roles in the Tommy Thompson Park ecosystem – they help cycle nutrients back to the soil through their droppings and are fundamental prey items for a wide range of predators including coyotes, raptors and snakes.

This non-native species is common in urban areas, and was first documented at Tommy Thompson Park in the early 1980s. Norway rats can devastate ground nesting birds by predating the nests of eggs and chicks. For this reason rat control programs have previously been undertaken near nesting colonies to protect ground nesting birds. Should you see any rats at Tommy Thompson Park please inform the park naturalist.